“One of the more popular hiking trails at Sabino Canyon with decent elevation gain & technicality. ”

The Phoneline Trail is definitely one of the more popular spots for hikers within Sabino Canyon, particularly for weekday or medium distance outings. It features uphill sections, quite a bit of moderately rocky & technical hiking, along with some stretches of fairly smooth trail. A portion of the Phoneline Trail also is used when heading up to Blacketts Ridge. The trail pretty much parallels the Sabino Canyon tram road just up above halfway up the ridgeline, with a few different paths cutting down to the road to create various distance loops if you want to head down the tram road rather than do an out & back. The Phoneline Trail often is used as a return option for the longer Bear Canyon Loop for those not wanting to use the tram road.

Getting to the Phoneline Trail you start out following the Bear Canyon Trail mostly gently downhill to the east from the Visitor's Center in the Sabino parking lot, After crossing over Sabino Creek at just over 0.75 miles you'll see a trail straight ahead which is the start of the Phoneline. Here's where the climbing starts as you begin your ascent, picking your way through the rocky footing. After about 0.6 miles up the Phoneline Trail you'll come to the turnoff for Blacketts Ridge on the right side. Continue straight on up past that.

After another 0.4 miles you'll come to the Phoneline Link Trail on your left that takes you back down towards Sabino Creek and the tram road. Again, continue on straight (right path) up the hill. The terrain begins to level out after a while as the climbing is mostly in this first section of trail and towards the end a bit too.

This is a very enjoyable trail and one that you'll find popular with trail runners and hikers alike. One great benefit to taking this one in the mornings is that you get quite a bit of shade for the majority of the trail. This is especially nice in the warmer summer months.

Plenty of animals and plants here at Sabino, including mountain lion sightings. 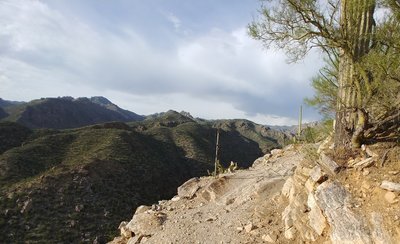 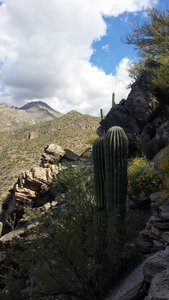 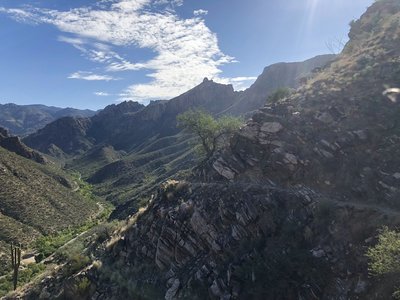 All Clear 50 days ago See History