“A thick forest trail crossing a few springs with lots of huckleberries when in season. ”

I first did this trail in the late 60's. I was one of the crew members that built the trail. There were five of us on the trail crew. We would head in and work for 10 days then 4 days off. Pack mules brought our supplies in - tent, cots, chain saw, fuel, dynamite, rock drill, food and misc. other supplies.

Our first camp was at North Lake, it was late spring or early summer and still lots of snow. We used them as a refrigerator and drinking water. As we got closer to Lake Ivern, we moved our camp to the lake. Most of the snow was gone and the trail went past some springs. We used the best spring, Buckley Spring (mine), for water and we put a large bucket in it covered with a burlap tarp. We put our perishables in the bucket and the evaporation from the wet tarp kept things cool.

One night we had quite a discussion about the progress we were making on the trail and the issue of naming things came up. The decision was made: we built the trail so it must be our responsibility to name things. The crew was down to 4 because a slacker got fired. The foreman, Frank, wasn't interested and neither was George so we came up with Jahn Spring (Phil Jahn), Buckley Spring (Bruce Buckley). One spring to go... North woods backcountry? Had to be Big Foot Spring. Then we promptly named our campsite "Big Foot Spring Campground." I haven't seen any reference to the campground just Buckley Spring and Jahn Spring.

I was using Google Earth and decided to look at Seven Lakes Basin. What a surprise to see the caption "Buckley Spring" and a picture. I never even considered that the name would stick - a real treat.

In August of 2015, I returned and headed about half way to Lake Ivern. There is a lot of deadfall across the trail, and it is becoming overgrown with huckleberries. Still an enjoyable trail through dense, cool forest. 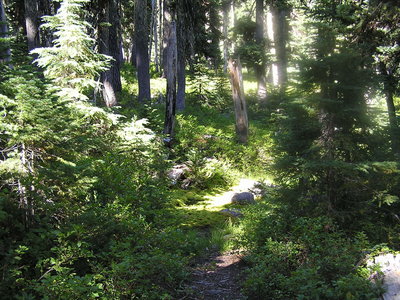 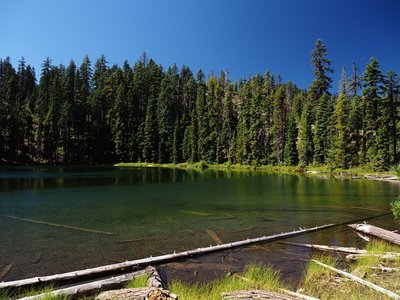 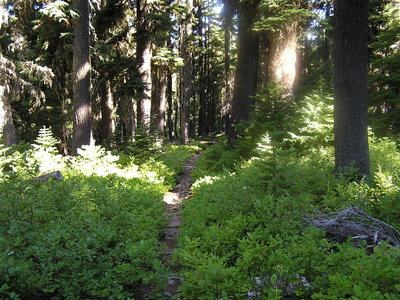