This is a great, strenuous route that makes for a very enjoyable overnight backpacking trip in Lost Creek Wilderness.

We went the first weekend in June. The snow had just melted, the grass was just starting to turn green, the willows had only small buds. The temperature wasn't too hot in the day or too cold at night.

There was water in three places: Ute Creek 1.6 miles from the trailhead, the monument on Bison Peak (dries up in the summer), and at the McCurdy Creek campsite.

The campsite was large, flat, and just above the creek.

The road to the trailhead is paved, making access easy for most hikers.

Initially, visitors will set off on the Ute Creek Trail #629, which climbs through the woods. At 4.0 miles there is a junction with the Brookside McCurdy Trail. Take the trail the right (east) for a short distance, before reaching the point where the journey to the summit of Bison Peak will begin by turning north onto the Southwest Ridge Route. There isn't really a trail to speak of, but the lack of trees and open spaces make this an easy ascent.

At about 5.0 miles into your journey, you'll climb out of the trees to open country. We found a little water below the large monument rock at 5.3 miles but don't count on this in the summer. We summited Bison Peak (12,431 feet) at 6.2 miles. The route to Bison Peak was fairly popular with other visitors. After that we saw only two parties (both backpacking) on the McCurdy Peak section.

We descended back to the Brookside McCurdy Traill and continued on to the saddle between Bison and McCurdy Peaks (8.4 miles). Then we went half a mile north off-trail to water and a campsite along McCurdy Creek at 8.9 miles. Looking at the map there might be another campsite a tenth mile up the creek, closer to the rock formations.

Once you've spent enough time at the summit of McCurdy Peak, make your way back to the Brookside McCurdy Trail, and take it back to the west. You'll follow this route along the foot of Bison Peak, and then to the intersection with the Ute Creek Trail #629, which will bring you back to the trailhead and your vehicle. 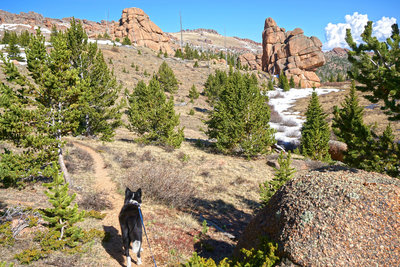 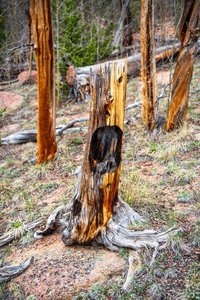 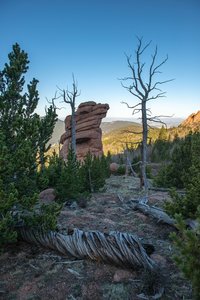