4.8 (24)
Plan with onX Backcountry
Previous Next

“This route is THE classic New Zealand day trip, and one of the top 10 hiking trails in the world. ”

Tongariro National Park is a World Heritage site, and a visit to the park will reveal why. This is a great trail with about 900 m of altitude gain. The route is popular in summer months, so plan to see others if you visit.

The crossing passes over the volcanic terrain of the multi-cratered active volcano Mount Tongariro, passing the eastern base of Mount Ngauruhoe which can optionally be climbed as a side trip.

The track follows Mangatepopo stream up the valley, climbing over a succession of old lava flows from Ngauruhoe. The youngest, very black, lava flows erupted from Ngauruhoe in 1949 and 1954.

The steep climb required to reach the Mangatepopo Saddle rewards climbers views of the valley and if clear, Mt Taranaki to the west. From the saddle, the track crosses South Crater, not a true crater but a drainage basin between the surrounding volcanic landforms.

Ahead more recent lava flows can be seen spilling over from Red Crater. The climb up to Red Crater offers splendid views of Oturere Valley and Kaimanawa Ranges to the east.

At the top of Red Crater, a poled route to the left leads to Tongariro Summit. The main track continues on past the rim of Red Crater itself. The spectacular formation on the far side of the crater is a dike, an old magma feeding pipe to the vent of the volcano. Harder than the ash and scoria around it erosion has left it exposed on the side of the crater.

North Crater is the large flat topped crater to the north. This vent once contained a lava lake which cooled to infill the crater.

Blue Lake is visible from the top of Red Crater, across the Central Crater - which like South Crater is actually another drainage basin. Blue Lake has formed where cold fresh water fills an old vent.

A scoria-covered ridge leads down to the spectacular Emerald Lakes, which fill old explosion pits. Their brilliant colouring is caused by minerals washed down from the thermal area of Red Crater.

From there, you'll continue a dramatic and scenic descent, passing Blue Lake, and then continuing on. There will be a few portions where the trail will be quite steep, and you'll want to use some caution to avoid tripping. Please do remember to look up every now and again, though, as the scenery will be breathtaking. 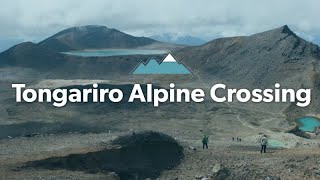 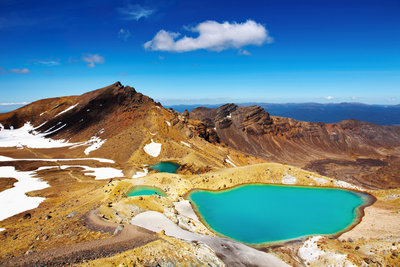 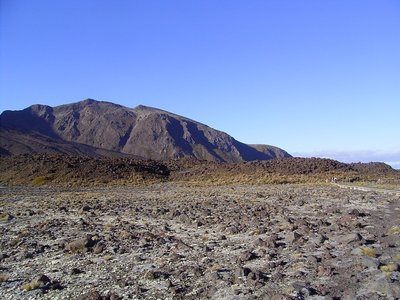 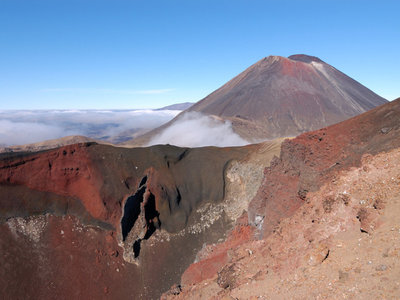