“A nerve-rattling singletrack hundreds of feet above Mundy's Canyon. ”

The newest trail in the Franklin Mountains, Upper Agave is a superior alternative to West Cottonwood Spring and an interesting trail in its own right. It begins on the northeast corner of the paragliding launch area on Agave Loop. Look for two small rock cairns at the edge of the clearing.

The trail is well-defined and easy to follow, with fewer rocks to contend with than on Agave Loop. A few cacti and sotols grow close to the path, but most have been trimmed back to a safe distance. The first half mile of the trail is a fairly strenuous climb. After moving south briefly, the trail turns east and clings to the side of the mountain, hundreds of feet above West Cottonwood Spring and the canyon below.

Before long, Upper Agave comes to the first of several scree crossings. These are the same fields the lower trails have to cross, and require careful attention to footing. The third crossing is particularly narrow and hikers should slow their pace in the interest of safety. As the trail rounds the corner above the beginning of Mundy's Gap, it enters a well-shaded area of the mountain. The shade blocks much of the intense desert sun, and as a result, plants have grown up in much greater numbers here. Some minor climbing is required before the trail crosses its largest scree field yet, an upper portion of the one making up West Cottonwood Spring.

Following this last crossing, the path comes to the green oasis of a desert spring. Upper Agave ends on the log stair segment of West Cottonwood Spring, about fifty feet down from the latter's namesake.

Agaves, opuntias, cacti and many sotols which are really beautiful in July when they are in bloom. Rabbits and lizards. 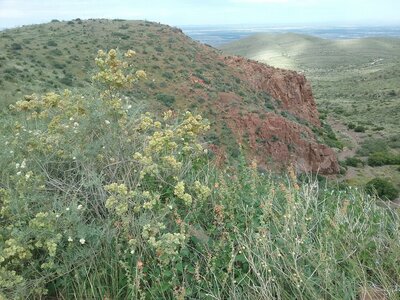 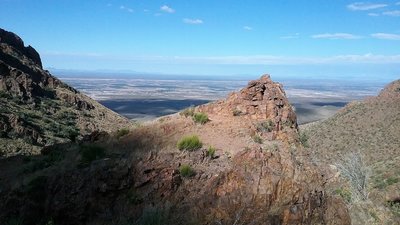 Nov 18, 2016
Jean-Claude Linossi
Hiked this trail from Cottonwood springs back to the parking lot. The trail is narrow in spots and there is some scree, so caution id advised. 0.7mi — 0h 30m