“A beautiful alpine tour with views of cliffs, open meadows and valleys, and cool rock formations. ”

This loop goes through one of the most beautiful sets of canyons in the Logan Canyon area. It can get a little steep in either canyon, but it is all worth it as the trail winds up by impressive cliff bands, and on the East fork it goes right by an amazing rock thumb that sticks up as a remnant of erosion in the area. On the road that connects the two sections, you get great views of Richards Hollow and the surrounding mountains.

From the parking area by the second gate, the road starts to ascend through a sparsely populated conifer forest. After about a half mile, the road ends at the Cache Valley Archery range (which is only open to members of the archery association, not just anyone who wants to go). Instead of going to the range, go to the left where the road crosses a small drainage where there is a sign that points to the left saying "Card Canyon East 064" and to the right saying "Card Canyon West." Take the fork to the right and the trail starts to slowly ascend by a dry creek bed.

It continues through a varying forest with conifers, scrub oak, and some aspens at times. This can be a really gorgeous part in the fall as the colors are changing. Eventually the trail starts to ascend more steeply through some rocky portions, and then it starts to switchback up onto the hillside above the drainage, which allows for some views of the cliff bands on the western side of the canyon, which are impressive.

Eventually, the trail starts to level off as it reaches the meadow that sits above the canyon (which can be filled with beautiful wildflowers in the spring) and eventually meets up with a dirt road, and another sign.

Follow the road as it ascends to the main Adams Corral road, which is the high point of the loop. From here, the descent on the road is enjoyable and easy going, and after less than a mile there is a small clearing to the left and a sign that marks the eastern fork of Card Canyon.

The descent into this fork of card canyon is somewhat steep, but then it quickly levels out as the trail emerges from the aspen/conifer forest into a large meadow with ponds in it (which in the spring is filled with gorgeous bluebells). The trail is somewhat poorly defined in this section, so keep your wits about you so that you can stay on the trail. Use the Hiking Project mobile app if you need to get your bearings. After leaving this clearing, the trail continues to descend and then switches back and quickly descends to a small fork in the trail where a really cool rock thumb can be seen (the fork to the right just goes up to the rock, and to the left bypasses the rock in favor of the normal trail).

From this point, the trail is very enjoyable, with some short steep uphill sections to break up the descent. Eventually the trail breaks out of the forested area into a small picnic area with several tables and a fire ring, and then back to the original trail fork and archery range. At this point, just follow the road back to the car and the fun loop is finished! 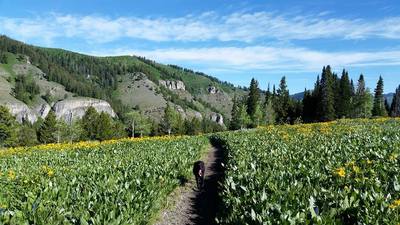 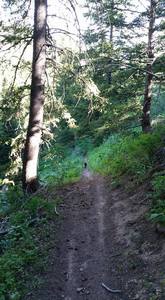 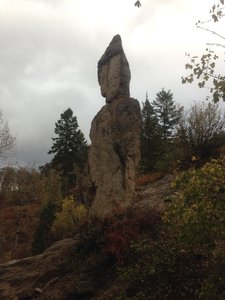 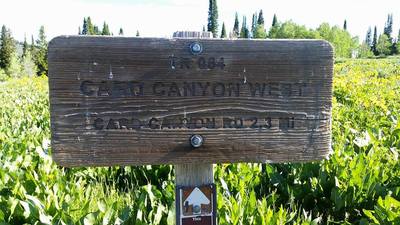 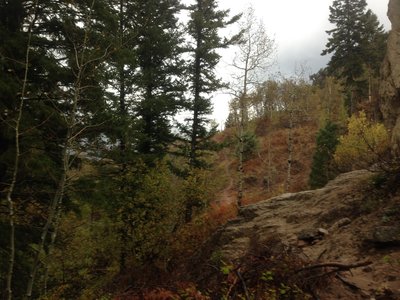 All Clear 39 days ago See History

Aug 3, 2020
Seth Seyfried
We went east to west. It was very beautiful and still very green! Both forks are equally steep, though the west would be harder to climb up.
Sep 3, 2018
J B
Good hike, debris in the way near the top by the road. If you do this hike go the opposite way the directions say. (Go East to West, it’s less stee… 8.3mi
Aug 3, 2018
Hannah Stamp
7.3mi
Jun 29, 2018
Samantha Gotcher
Took the west fork up (very rocky). The prairie was AMAZING! I missed the east fork and had to back track. Be careful with your footing. 7.8mi
May 31, 2018
Tyler W
1 or two fallen trees. I wish I brought some mosquito spray and there is a lot of bush near the sides of the trails so don't wear shorts like I did 7.4mi — 3h 35m
May 24, 2018
Shane Guymon
Road requires vehicle with clearance, went up in a car and was definitely sketchy. Gate is roughly .9mi fromm Card Picnic Area would be a better idea 7.3mi — 3h 00m
Apr 29, 2018
Sean Cochran
Apr 23, 2018
Valerie Fuller
Road up to the second gate requires higher clearance, but we were able to park at a campsite .5 miles away. Wasn't able to complete loop due to snow. 4mi — 1h 30m
Sep 30, 2016
Braden Smart
7.3mi
Jun 24, 2016
Corey Twedt
Amazing hike. Went from East to West. Didn't see any other people. Water in creeks on both sides. Flowers in full bloom on top.
Mar 27, 2016
Mani Villafane
Didn't make it all the way to the loop, had to turn around because the snow made it unclear where to continue the trail. Will be back. 5mi — 3h 18m