“This holy grail for volcano trekkers is a formidable backcountry undertaking. ”

Most people make this into a 4-day excursion, utilizing the hut system for overnights. Extreme weather (including heat and cold), intense sun, and very rugged terrain contribute to the seriousness of this route.

The trail starts at the end of the Mauna Loa Road, near the Mauna Loa lookout and picnic area. Leave the scattered trees, birdsong, and vegetation behind as you climb steadily uphill, encountering many neat lava tubes. Elevation signs mark your progress. Enjoy the views back towards the steaming Kilauea volcano if the skies are clear.

On the approach to Red Hill Cabin (also called the Pu'u 'Ula'ula Rest House), you'll surmount a strikingly red lava slope. Years of weathering have oxidized the iron in this patch of lava to give it this red color. This 8-bunk cabin usually has catchment water in a tank and tents can be pitched nearby. The first cabin to be built in this spot in 1915 was torn down in 1996 and replaced with this larger one.

Continuing uphill from the cabin, the trail passes an impressive number of spatter cones and holes. Keep an eye out for foamy looking golden lava and black, shiny, water-droplet shaped pebbles called "Pele's Tears." These bits of volcanic glass were formed when molten material was ejected and flew through the air during an eruption. Depending on the time of year, you may hike through snow patches nestled into the vast fields of lava. Proceed along a newer flow from 1984 which partly buried the old trail in this area.

Soon the reddish Pukauahi cone appears to the northwest with some yellow sulphur deposits marking fissures from 1984. The signed Dewey Cone is named after Admiral Dewey who commanded a fleet in the 1899 Battle of Manila.

Next comes a sign for the, no longer, Steaming Cone and the Waterhole. The water in the waterhole is often frozen and may not be good quality. The undulating trail teases hikers with several false summits. Upon reaching the Mauna Loa caldera rim, the trail terminates at a junction with the Cabin Trail and the Mauna Loa Summit Trail.

Beware of altitude sickness, bring warm clothes, sun protection, excess water and food. To avoid getting the bends, scuba divers should not ascend Mauna Loa within 24 hours of their last dive.

Bats, some birds at lowest elevations. 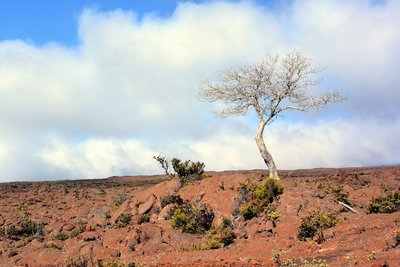 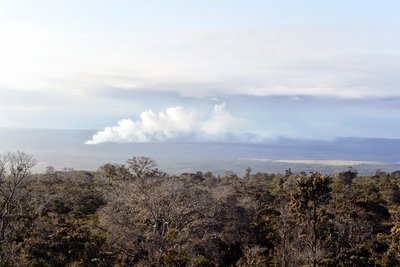