“Follow an old stagecoach road to the top of Mount Washburn and enjoy a commanding view of the Park. ”

Depending on Winter snow-pack, the upper reaches of this trail may be covered through June and into July. Check trail conditions before heading out.

There are two primary routes to the top of Mount Washburn. The Chittenden Road Trail (described here) and the Mount Washburn South Trail (which begins at Dunraven Pass). Both trails follow an old roadbed and gradually climb 1300+ feet. Both afford spectacular views and wonderful wildflower displays. Most visitors however prefer the Mount Washburn South Trail, because the twists and turns of the trail are more dramatic and the views to the south of the Grand Canyon of the Yellowstone, Hayden Valley, and Yellowstone Lake are more interesting.

To find the trailhead to the Chittenden Road-Mount Washburn Trail, follow the well-marked Chittenden Road for a half-mile or so south and east of the Grand Loop Road to a large parking area. From there, the easy-to-follow dirt road climbs steadily, but never too steeply, through mostly open meadows to the top of 10,243 foot Mount Washburn.

The mountain was named for Henry D. Washburn, Surveyor-General of the Montana Territory and leader of the 1870 Washburn Expedition through Yellowstone. That year General Washburn climbed this mountain to locate the best route to Yellowstone Lake. "The country before us was a vast basin. Far away in the distance, but plainly seen, was the Yellowstone Lake," wrote Washburn.

The first fire lookout station on the summit of Mount Washburn was constructed in 1921. The current station was built in 1940. In 1979, a small Visitor Center was added. Because of its central location, Mount Washburn affords the best possible overall view of the park. General Sherman of Civil War prominence summed it up well when he stated, "Any man standing on Mount Washburn feels as though the whole world were below him." On a cold day it is even possible to make out the steam from an eruption of Old Faithful!

Throughout this route are excellent opportunities for viewing dozens of species of wildflowers. You should spot low mats of 5-petalled white to lavender flowers known as phlox, striking rocket-shaped pink and yellow flowers called shooting star, and the long spines of blue to purple pea-like flowers named lupine. The conspicuous fiery red tops of the Indian paintbrush (Wyoming's state flower) are due to the color of the bracts rather than the flower itself. The paintbrush is a semi-parasitic flower. Its roots tap the roots of other plants for nourishment. Near the summit, small bands of bighorn sheep are occasionally seen. 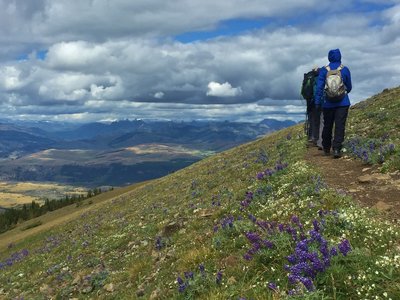 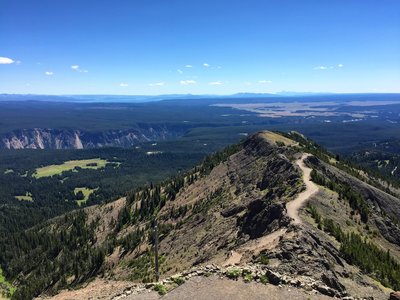 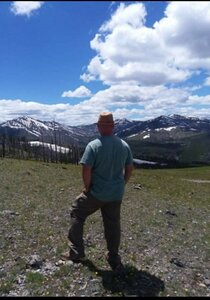 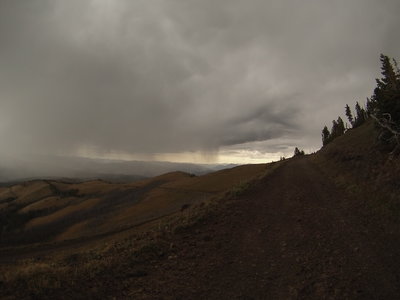 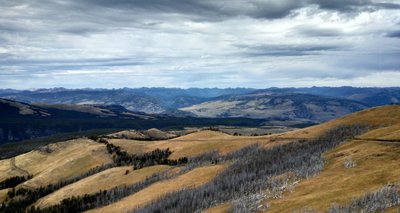 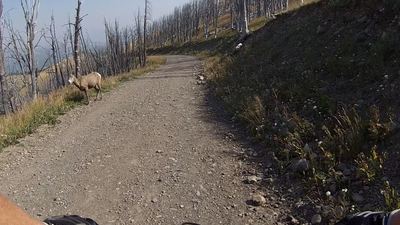