“A beautiful, but tricky climb from the village over two peaks and back. ”

This trail takes hikers from the village of Tremblant, up a 2,000 foot climb, over two peaks, with views of the village to the south and Parc National du Mont-Tremblant to the north. This circuit is a challenge with it's extremely technical terrain, changing weather from base to peak, and elevation gains, but it is very much worth the effort as hikers are treated to scenic views, wooden "bridges", and good coffee back in the village.

The trail takes hikers away from the village before coming back to "civilization," however, there are emergency signs posted in case of...an emergency. However, I personally don't speak french, so I couldn't tell you what they said.

i.e. You may want to brush up on your french, n'est pas?

The trail starts at the top of the village/base of the slopes. Taking the large dirt road/path on to the left, also called the Ruisseaux Trail (blazed in purple and white). This trail is wide open, also used as a ski slope in winter. It will eventually connect with Caps Trail (blazed in green and white). You'll hike along a dirt/cinder road for the first mile. Admittedly, this is the trickiest part of the circuit because you'll second guess yourself when you don't see any real singletrack. Continue on the trail until you come to a switchback in the road. Here, a larger wooden sign will call out the Johannsen Trail (blazed in orange and white). This is where the singletrack begins, and so does the real climb.

To this point, you'll have climbed 200-300 feet, but the remaining 1,700 feet all comes within the next 2 miles along the Johannsen Trail. Early on the trail you'll come to a stream crossing over a wooden bridge. This is the wettest section of the circuit, with the trail covered in pine needles, mostly soaking wet (although I was there during a rainy spell), and steep sections with boulders, fallen trees, and boggy parts. However, it offers a ton of fun for those who like the challenge.

At the top of the climb, you'll know when you've reached the top because the trail will FINALLY give some feeling of leveling out, you'll come to a marker with a quote in french. It's pretty cool and is accompanied with a view.

Turn right, and head down the Sommets Trail (blazed in pink and white). You're now on your way to connecting between Johannsen and Tremblant peaks. At one point along this trail, maybe 3/4 mile, you'll come to an opening and you'll be able to see Tremblant peak, and a gully you'll have to hike down to get to the peak. Note, at this opening the trail is across the field and to the right side.

At the end of the Sommets Trail, you have two routes to the Tremblant summit using the same trail, 360 trail. Once at the Tremblant summit, take in some great 360 degree views. Then head down the mountain using the Grand Brule Trail (red and white blaze). This trail is 180 degrees opposite of the Johannsen Trail. It is much drier, rockier and has several overlooks from atop huge rock outcroppings. Be careful at these rock outcroppings, because the trail will take you down a few short drops, and makes turns with minimal blazing.

The Grand Brule Trail dumps you out back where you started, having taken you for a beautiful trek around Mount Tremblant.

At Johannsen Summit a marker reads:
"The land belongs to anyone: she gives herself to all those who are big enough for the hug."
-Rjean Ducharme 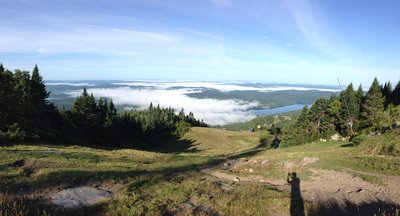 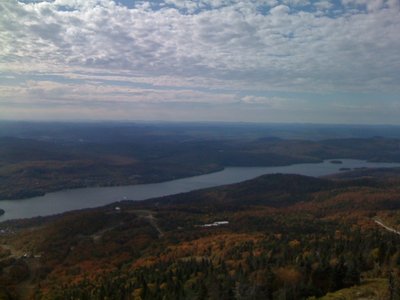 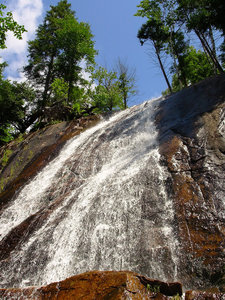 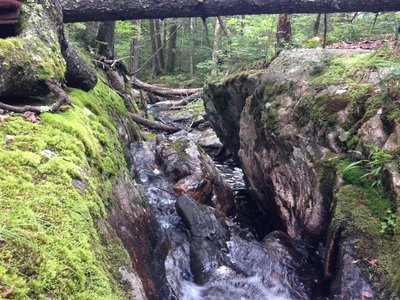 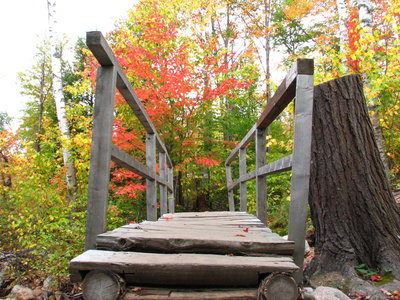 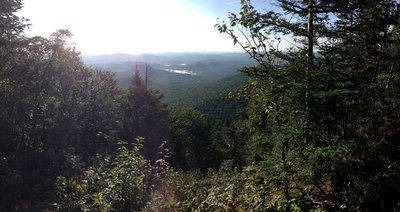