Can be closed during winter due to snow or avalanche risk, check with local DOC office (May - early October)

With towering waterfalls, rushing rivers, and epic alpine scenery the Routeburn Track is one of New Zealand's premier tramps. Although the track has some challenging sections, and the weather in the Southern Alps is never to be treated lightly, the route is never terribly steep and offers long stretches of easy hiking amidst breathtaking scenery. Comfortable huts help make this an outstanding and popular tramping experience. There are side routes up to Key Summit near Howden Hut and Conical Hill near the Harris Saddle.

During the Great Walk season, which runs from late-October to late-April, hut bookings are required. In-season the huts are equipped with gas cooking stoves and are staffed by a ranger. Huts are first-come first-served during the off-season, and there are no cookstoves or rangers and winter toilets are used.

This is a point to point track that can be done in either direction. Numerous public transport and vehicle relocation options exist to aid with logistics at the end of the route.

The Routeburn Track can be done in either direction and is typically completed over three days using the Routeburn Falls and Lake Mackenzie Huts. The direction described here, from Routeburn Shelter (near Queenstown) to The Divide (near Te Anau) is slightly more popular.

From the trailhead at Routeburn Shelter the track crosses the Route Burn via an exciting swing bridge and enters spectacular beech forest in the valley bottom. The track is easy as it crosses Sugar Loaf Stream and then follows closely the Route Burn, a beautiful stream with pools and cascades worth admiring. As the track proceeds up the valley it crosses the Route Burn again and passes open meadows with views of the mountains above. At an intersection, a side-trail leads to the Routeburn Flats hut and campsite (a nice facility, but primarily used as a second choice by trampers who find the Routeburn Falls Hut fully booked). From this intersection, the trail climbs steeply up the valley wall, crossing a dramatic landslide area with tremendous views across the valley, to the Routeburn Falls Hut near the bush line.

Above the Routeburn Falls Hut, the track is alpine in character and stays above the trees for nearly 11 kilometers. Immediately above the hut Routeburn Falls and the chasm in which the stream flows is an impressive sight, especially in wet weather. As the trail progresses higher views of the mountainous terrain are outstanding. Eventually Lake Harris, an often ice-bound lake tucked in a spectacular mountain bowl, comes into view and a highlight of the track is the system of ledges that is followed high above the lake.

Harris Saddle marks the high point of the route, where there is an emergency shelter and commanding views of the Hollyford Valley and Darran Mountains. A side-trail leads to the summit of Conical Hill, which offers even better views in fine weather. From Harris Saddle, the track descends into the Hollyford Valley and contours south with ever-unfolding views of the mountainous scenery. Eventually, the track drops steeply into the spectacular Lake Mackenzie basin, where the Lake Mackenzie Hut can be found near the southern end of the lake.

From Lake Mackenzie, the trail climbs briefly to near the bush line and then contours along the slope of the Alisa Mountains through lovely forest interspersed with fantastic views. The leap of Earland Falls (174 meters) is a treat on this section of the hike. On a warm day the mist will be refreshing; on a wet day you may need to take the marked flood route that steers clear of the foot of the falls.

The Routeburn valley is home to a number of rare native birds, including Yellowhead, Blue Ducks, South Island Robins, Rifleman and Kaka. At higher elevations, Kea and Rock Wren may be seen. 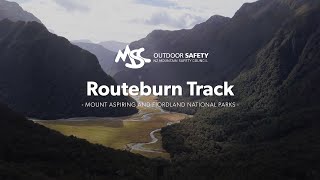 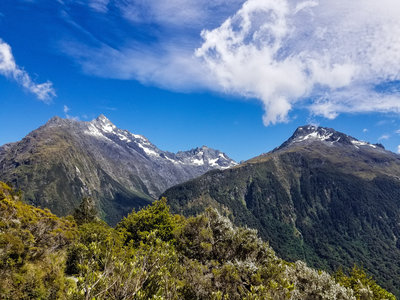 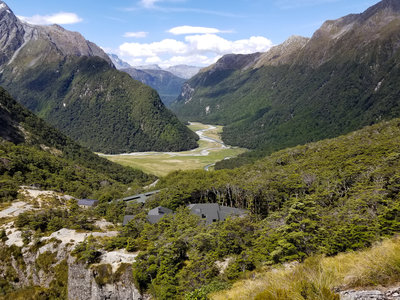 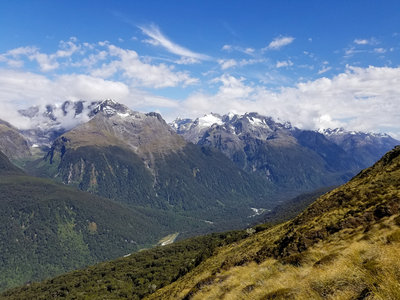 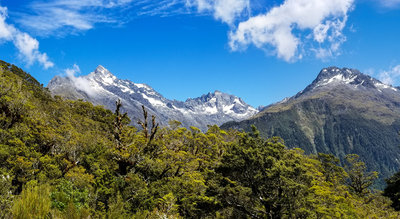