5.0 (3)
Plan with onX Backcountry
Previous Next

While Lake Como Rd. is seldom officially closed for the winter, even fewer cars will be able to make the trip if there's snow present. While this route is doable in the winter months, it's extremely difficult already, and generally avoided.

While dogs may be able to summit Blanca Peak and Ellingwood Point, they will not be able to do Little Bear Peak without being placed in a backpack. If your goal is this mountain, leave Fido at home.

While the easier Blanca Peak and Ellingwood Point provide excellent hikes in their own right, Little Bear Peak is generally regarded as Colorado's hardest 14er (although some would give this honor to Capitol Peak). This hike takes its challengers up Little Bear's northwest face, an alpine scramble almost 2,000 ft long, before descending the standard "Hourglass" route, a steep and often icy gully. Few hikes will acquaint hikers so intimately with a mountain in just one summit.

This is one of the most dangerous, exposed, and fatal 14er routes in Colorado. Wear a helmet, and don't even think about this climb until you have plenty of other high altitude scrambles under your belt. This climb is just shy of necessitating a rope and climbing rack. Approach shoes are an excellent alternative to hiking boots, as they will provide better traction on steep rock.

If I need to tell you what to bring, you shouldn't be climbing this.

DISCLAIMER: this is a challenging and dangerous route. While the GPX file provides a rough guideline, the majority of this route is off-trail and requires common sense navigation. Do not trust the GPX explicitly!

From the end of Lake Como Rd. (Lake Como), travel along a clear, flat trail just north of the lake. This will wrap around the east side of the lake before heading uphill into some trees. Exit the trees in about 0.5 miles, walking along a gravel path until Little Bear Peak is visible to your right. You'll pass the gully headed toward the standard route of Little Bear Peak, continuing just another couple hundred yards along a talus field. Look for a black area of rock, about 10 meters high and shaped kind of like a broken hand. This is "the Black Hand."

Cross a small stream to your right (sometimes dry) onto the talus field. Continue across about 100m of talus, gaining roughly 300 vertical feet, before you come to solid rock and the scrambling begins. Stay to the right of the Black Hand. This should keep scrambling to class 4, although without good route-finding skills you may be forced to make some low class 5 moves.

Once on top of the black hand, continue upward, angling slightly toward the left. This should put you in a broad, shallow gully, keeping the scrambling to class 3-4. Due to lower grades, water often pools here; low sunlight means there may be ice. Continue up the gully until about 13,000 ft, when the grade begins to get extremely steep. TAKE YOUR TIME HERE! There are many ways to wind up on class 5 spots where a fall would prove fatal. Pick your route carefully, and keep things to class 4 with hundreds of feet of exposure. GPX tracks are of minimal consequence here. Find what works for you. The rock is loose, the route exposed, and the scrambling fun.

At around 13,800 ft, reach the Little Bear summit ridge. To your left is the infamous class 5 Little Bear/Blanca Traverse. To your right is the Little Bear summit. Scramble up solid rock slabs to about 14,000 ft. For the last couple dozen vertical feet, you get to stand! Pretty exciting. You haven't done much of that up to this point. Take a moment to collect yourself and enjoy the views from the summit. Blanca Peak and Ellingwood Point are to the NE, and the Great Sand Dunes to your NW. The nearby summit is South Little Bear, a point over 14,000 ft but too lacking in prominence to be considered its own mountain. Take your time: you still have a harrowing descent.

This route uses Little Bear Peak's standard route as a descent. Affectionately known as "The Hourglass," this route consists of a steep downclimb through a loose gully, followed by a hike out along some talus.

From the summit, head southwest down some rock slabs covered in shale. You'll be funneled to the Hourglass. This gully is about 200-300 feet long and is composed of large rock steps at an incredibly steep grade. Due to its narrowness, it is recommended only one climber descend at a time. Any more and the lower one is at risk for taking rocks to the head. Every year, a well-meaning climber attaches a rope to the boulder at the top of the Hourglass, with the intention of providing a rappel. This is controversial: while the rope often provides safe egress, it is also prone to wear from sitting at 14,000 ft for months on end. If you do use the rope, consider it backup, and use your own feet to walk down the slope while giving yourself slack a bit at a time. Be prepared for ice in this gully as well.

Come to the bottom of the loose gully. The hard parts are now over. Head out on fairly flat ground to the west on some talus, just south of a rib of Little Bear, before coming to a notch in the rib. There is a clear gully to the right here, at around 12,800 ft. Scramble down the class 2+ talus gully, full of loose rock, down to about 12,000 ft. Cross a stream, regaining the easy path you were on before all the shenanigans started. Make your way back to camp and relax.

Lake Como is known for its ursine population. Bring a bear can, or at least make sure all your food is sealed and outside your tent. 90% of this hike is on rocks, so once you're scrambling don't expect to see too much in the way of plants or critters.

The Blanca Group (Little Bear Peak, Ellingwood Point, Blanca Peak) is one of the most unique massifs in Colorado. Rising thousands of feet above a flat alpine desert in the southernmost reaches of the state, the drive to this area is otherworldly. 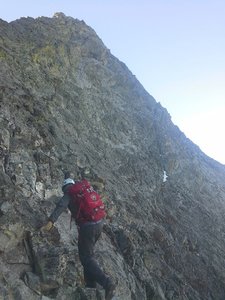 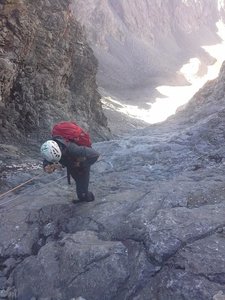 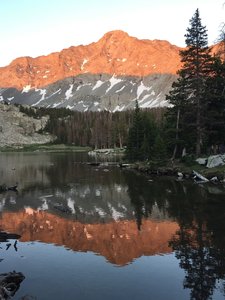 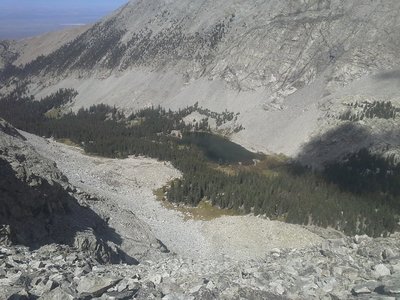 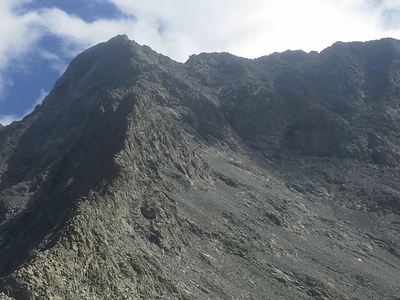 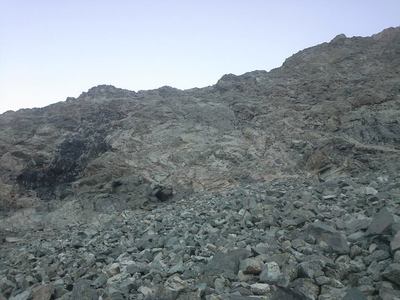